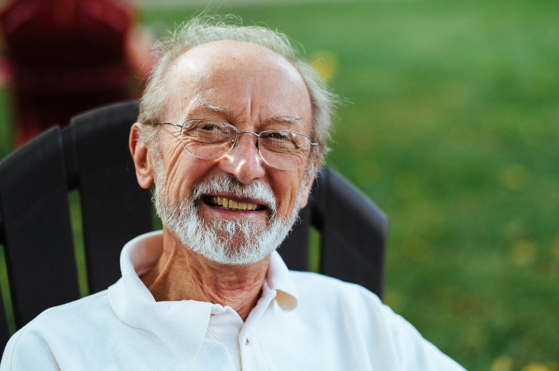 It is with much sadness that I announce philosophy professor emeritus Ronald Bruzina passed away this May. Dr. Bruzina was an esteemed faculty member in the Department of Philosophy from 1970 until his retirement in 2016. During his distinguished 46-year career in the College of Arts & Sciences, Dr. Bruzina chaired the department from 1978 - 1982 and oversaw numerous dissertations. He was a world-renowned scholar of Husserl and the phenomenological tradition, and an important expert on Edumund Husserl's philosophy. Dr. Bruzina was a dedicated and beloved teacher and will be greatly missed.

In May of 2019, Professor Ronald Bruzina passed away in Lexington, KY. Born on July 9, 1936, he received both an M.A. (1961) and a Doctor of Philosophy (1966) at the University of Notre Dame. The dissertation he wrote there formed the basis of his first book, Logos and Eidos: The Concept in Phenomenology, published in 1970 by Mouton and Company. After Notre Dame, he moved to Canada to teach at St. Paul's College in Manitoba. During these early years, he received two research grants which allowed him to study in Paris from 1966-1970. In 1970, he earned a Doctorat de 3e Cycle from the Université de Paris-Nanterre for which he wrote a thesis titled "Wittgenstein, Heidegger et la pensée du langage." Returning to the States, Ron obtained a position in the Department of Philosophy at the University of Kentucky where he taught for rest of his career. There he rose to the rank of full professor, chaired the department between 1978 and 1982, and oversaw numerous dissertations during his many years at UK. He received a Humboldt Stiftung award in 1977-78, which allowed him to engage in research at the Husserl Archive in Cologne on Husserl's and Heidegger's philosophy. In 1985-86, he received a second Humboldt award which gave him the means to conduct sustained research into Eugen Fink's Nachlass in Freiburg. A world-renowned scholar of Husserl and the phenomenological tradition, he was an exceptionally important expert on Edmund Husserl's philosophy, most especially of Husserl's work during his last years with his assistant, Eugen Fink. A dedicated and beloved teacher, he held a Visiting Professorship at the University of Colorado, Boulder in the fall of 1982 and became a Fulbright Lecturer at Tohoku University in Sendai, Japan during the academic year, 1991-92. He retired from UK in 2016. His retirement allowed him even greater freedom to lecture internationally until illness forced the cessation of his academic life.

In addition to two anthologies, both co-edited with Bruce Wilshire, Crosscurrents in Phenomenology (Martinus Nijhof , 1978) and Phenomenology: Dialogues and Bridges (SUNY Press, 1982), Ron's most important sustained works in phenomenology revolve around Eugen Fink's assistantship with Edmund Husserl. In 1995, he published the authoritative translation of Eugen Fink's, Sixth Cartesian Meditation: The Idea of a Transcendental Theory of Method, with Textual Notations by Edmund Husserl (SUNY Press), a work justifiable selected as a Choice Outstanding Book for 1995. Then in 2004 he published his magnum opus, Edmund Husserl and Eugen Fink, 1928-1938: Beginnings and Ends in Phenomenology with Yale University. This work brings together Ron's many years of research into Fink's work with Husserl and includes deep and penetrating analyses of both Husserl's and Fink's unpublished research work together. The book, at once, synthesizes decades of Ron's unique research and broached new domains of study into phenomenological philosophy.  In 2006, Alber published the first of a two-part edition of the Fink Gesamtausgabe dedicated to Fink's work during his assistantship with Husserl. Edited by Ronald Bruzina, the first published volume is titled Phänomenologische Werkstatt. Teilband 1: Die Doktorarbeit und erste Assistenzjahre bei Husserl. The second planned publication in the series has been delayed due to illness in the last year of Ron's life, which precluded him for completing his editorial efforts before his death. Both his magnum opus and his editorial work on the Werkstätte volumes provide essential new documentation relevant to the expression of both transcendental and existential phenomenology worldwide.

Abjuring any sort of dogmatic analysis, perhaps Ron's most profound contribution to phenomenology could be said to be his devotion to co-thinking or co-philosophizing the matters at issue in phenomenology. An important and early member of both the Society for Phenomenology and Existential Philosophy and the Husserl Circle, Ron's deeply personal engagement with the living scholarship of phenomenology marked his approach, whether this be with senior philosophers at the top of the profession or new graduate students just beginning their research. Though one might disagree with his conclusions, or even – at times – his premises, he exuded respect for the person thinking with him through matters of the most importance. He received in turn the highest esteem for the breadth and depth of his understanding of the field and his sensitivity to the questioning driving their shared engagement. In his writings, lectures, teaching, and personal contacts he advanced the rigorous study of phenomenology while working to break down barriers between philosophy and the sciences, especially in the field of cognitive science. Though small of stature, his presence was enormous. Much loved, Ron is survived by his wife, their three children and one grandson, and two brothers and their families.